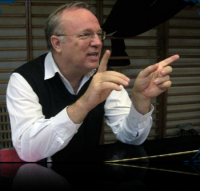 The Belgian-American musician David Miller has made a 35- year career in Brussels as pianist, conductor and composer. The majority of his piano-playing has been as a répétiteur at major European opera houses, including La Monnaie, La Bastille, Toulouse, Dresden, La Scala, as well as the summer festivals in Bayreuth and Pesaro.

As an assistant conductor to, among others, John Pritchard, Giuseppe Sinopoli and Sir Colin Davis, David Miller has conducted public performances with the orchestras of La Monnaie, the Liège Opera, the Dresden Opera, as well as the Orchestre de Chambre de Wallonie with José Van Dam, the Brussels Sinfonietta, the Charlemagne Orchestra, and the orchestras of the opera houses of Santiago de Chile and Genoa. He has conducted many operettas and musicals with BLOC (Brussels Light Opera Company) and the American Theater Company in Brussels. In the past his annual Christmas concert at the Palais des Beaux-Arts was a highlight of the Brussels holiday season. David Miller is also regularly invited to conduct student orchestras at various conservatories, including the Brussels Francophone Conservatoire.

David Miller is married to the Belgian-American musician and educator, Marty Rowe, and the proud father of six and grandfather of one, most of whom also call Brussels home.